In part one of my Adventures in PowerApps and Power Automate blog I showcased the sign up PowerApp.
In Part 2:Adventures in PowerApps and Power Automate I showed you the Flow, or Power Automate as it is now called, that saves the records into the Azure Blob.
Now in part three I am ready to unveil the second PowerApp that will be showcased at Priority Bicycles during the National Retail Federation conference. This second app has a lot more going on. So in this blog I will just focus on the facial recognition portion, then in a future blog we will look at the other features.
This app will be prominently displayed on the new Surface Hub 2S when you arrive at Priority Bicycles. While running a PowerApp on a Surface Hub is maybe not the most practical application, it sure is cool. If you have not seen the new Surface Hub 2S, you should check it out here. ()
The initial page of this app is much more simple by design. It is similar to the sign in app in that it contains the same camera and image controls. However the camera control and image control are much larger because I don't need to take up real estate for the contact information. (After all, I theoretically already know who you are because you signed up in the sign up app at the booth or on the bus.) [Also it does not do leg or feet recognition - HA!] 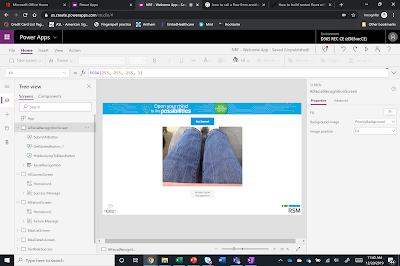 The first page of the app is quite simple to look at. You click a get started button to take the picture. Then you click the Initiate Facial Recognition button to kick off the whole thing. The camera and image controls again, are the same size and overlap each other. You can learn more about these controls in the first part of this blog series.
Where the magic really happens is in the OnSelect of the Initiate Facial Recognition Button. I wish I could make the button play audio in the Start Trek/Sci-Fi voice, because that would make this even more often.
Here is a run down in real words about what the function does.
Here is the actual function in the OnSelect button property:
Set(gloresult,'NRF-Sign-In-AI-Facial-Recognition'.Run("PowerAppImage",ImagePreview));
Set(
gloNextScreen,
If(
gloresult.ismatch,
AISuccessScreen,
AIFailureScreen)
);
Set(
gloResultContact,
First(Search(Contacts, gloresult.name, "fullname"))
);
Set(
gloResultCategory,
gloResultContact.'Bike category preference'
);
Set(
gloResultContactName,
gloResultContact.'Full Name'
);
Navigate(
gloNextScreen,
ScreenTransition.Fade
);
The AI Success Screen is also very simple. It simply displays the persons name and the category of bikes they selected from the first app. The next button navigates to a new screen where they can start to explore the bikes. I will explore this screen and the amazing IoT magic that is happening there in my next blog. 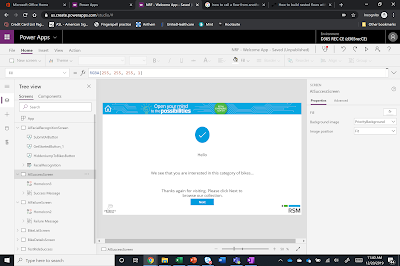 The failure screen is also very simple. This could use a bit more design work to make an experience to recapture their data if we could not find them, but again for simplicity sake we just say sorry we could not find you. Keep in mind that facial recognition is not perfect. Although we have done some testing with different lighting, faces, beards, glasses, hats, and so on - it is by no means perfect. One thing to note is that the images you capture for facial recognition really need to be a close up with just a face. It cannot be a full body shot or have multiple people in the image. We also found that the Surface Hub 2S camera requires you to get awkwardly close to get a good enough image for the API to recognize you. So we are actually casting a Surface Pro tablet to the Hub and the image is captured with the tablet. 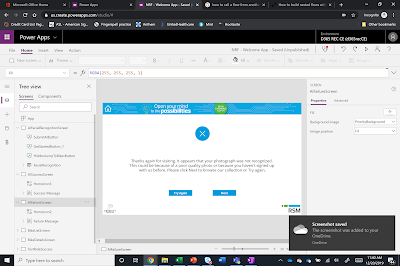 In the next part of the blog we will explore the Power Automate or Flow that is behind the facial recognition. 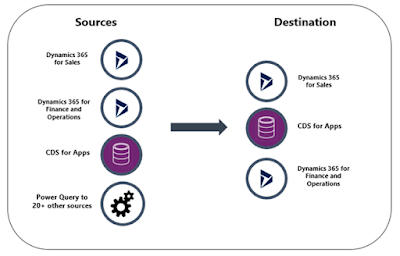 This has been a really hot topic lately, especially with the addition of new Dual write features and the CDS coming with Dynamics 365 for Finance and Operations. I have given webinars on this topic a handful of times and presented this topic at various user group conferences around the world as well and it has always been a topic of interest. So, I figured, it was time to go ahead and make a blog post about it. What is the Data Integrator We have all seen this picture before. But what is missing are a few key circles. First we should add a circle for Dynamics 365 for Talent to both sides. It is possible to have two destinations but this diagram does not depict that scenario. The last thing you can't really see from the picture is the Power Query options to connect to 20+ other sources. This includes things like SQL Databases, Sales Force (Heaven Forbid you don't use Microsoft Dynamics 365 for your CRM :)), and Excel Spreadsheet just t 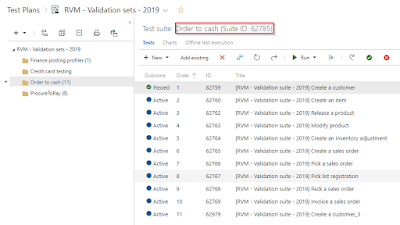 Welcome Guest Blogger Latha Kalaga Hello World!...for the first time ever, I have a guest blogger. Please help me welcome Latha Kalaga. I have been working with Latha for nearly 13 years and she brings a myriad of expertise on all things technical related to Dynamics 365. Because Microsoft has introduced her in more than one session as the "number one user of RSAT", I thought, hey why not get her to write this blog about RSAT. I can honestly say, Latha taught me everything I know about RSAT, and I hope you enjoy this post. Introduction to the RSAT Microsoft introduced the concept of continuous update in July of 2018 to ensure that all Dynamics 365 for finance and operations will be on One Version of the software. The customer will have 7 calendar days to validate an update that has been applied to a sandbox environment prior to rolling out the update to production. To support this activity, Microsoft also rolled out Regression suite automation tool (RSAT) to help the

One of the my favorite features to demo and talk about to finance people who are looking to upgrade from AX 2009 to AX 2012 or the new Dynamics 365 for Operations is the new financial dimensions framework  in the General Ledger (GL)  module. I wrote a four part series for my company a while back, and I have given it a refresh for Dynamics 365 for Operations. This four-part series will provide some insight in how to set up and implement dimensional-based financial systems. Part 1 – Dimension-based GL’s vs. Traditional Segmented GL’s When I started to script out this blog, my initial intent was to use the typical pros and cons approach for both segmented general ledgers and the more modern dimension-based ledgers. I quickly ran into a little problem though. I couldn’t quite find any benefits of using the traditional general ledger system.  It was a bit like modern dentistry. Once Novocain was invented, would you really want to frequent a dentist who didn’t use it? From a definitio